The Wind Dancer Pony Rescue Foundation was established in March of 2011, dedicated to the memory of Isabel Dupuy, a talented young horsewoman.

Isabel was wise beyond her years and was determined to one day establish a pony rescue on her farm.  She died at only eleven years of age but left a strong legacy in her dreams and determination to help ponies and to make the world a better place.

The Founding Board of Directors, led by Isabel’s mother, Dr. Paula Dupuy, are working towards making Isabel’s dream a reality.  A charitable corporation (Charity BN/Registration #801879917RR0001), Wind Dancer Pony Rescue Foundation will serve to help the unwanted pony both domestic and wild, to educate the public on the wonders of the pony and its care, and will be a place where the many facets of the equestrian community can come together.

The Story of Wind Dancer 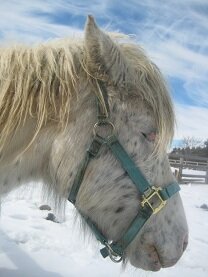 In August 2009, I was called to an emergency at a local farm.  We had driven past this farm many times and Isabel had always admired the many ponies, especially the spotted ones.  These ponies ran wild with a herd of cattle and had not been handled much at all.  The farmer suggested at that visit that I take one of the ponies home for Isabel – the offer of course was quickly declined.

Shortly thereafter there was a second emergency at the same farm.  That day the farmer took Isabel out into the field in a small farm vehicle to see the ponies…he said in no uncertain terms that Isabel needed to pick one.  I conceded to the tour, firm in my stance that would be the end of it.     We certainly were not going to just take another pony home.  There was a spotted pony at the cattle feeder that we couldn’t get to in the farm vehicle so Isabel and I climbed into the feeder to see her.  Many of these ponies, running in a herd, were skittish if not almost feral. This pony came tenderly forward to Isabel and sniffed her hand.  Isabel said “I want this one”.

The practical side of me said no, thank you for the tour, we will now be heading home.  Isabel was not the same after that experience, living and breathing the desire for that pony in every moment.  So I thought about it and offered Isabel a deal.   I told her I would board the pony in exchange for barn chores three days a week, which would have to be done for one month before we could get the pony.  Well Isabel did those chores from that moment up until the time she passed away.  Dancer came home to live with us, Isabel was on her back the first day home and went on to ride her successfully in Pony Club, at fall fairs and in the hunt field.

I have Wind Dancer still, and there remains a wild look in that pony’s eyes that she will only allow a certain few to hold.  Like Isabel she is wild and only sometimes tamed, stubborn yet at times most willing, wise and gentle, strong and free.  Wind Dancer will remain the symbol of all that Isabel was in life and of the great legacy that we are building beyond her death.

Somewhere in time’s own space

There must be a sweet pastured place

Where creeks sing on and tall trees grow, some paradise where horses go.

For by the love that guides my pen, I know great horses live again.